"Born and raised proper, I guess life just bugged him"

"I guess the cops won again"

Posted by The Derelict at 10:25 PM No comments:

I am not a movie buff

This was a shocking revelation for me. I think I realized it after reading my fourth "Avatar" rave. I am so utterly, completely not interested in "Avatar" that the whole acclaim and hype surrounding the thing is making me seriously annoyed. Like, it's pissing me off. Why is some dumb movie that I don't even want to see pissing me off so much? Is it because everyone likes it and/or wants to see it except me? Is it because I think it looks like shite and I'm annoyed that my fellow moviegoers are falling for it's superficial and empty charms? Is it because everyone's proclaiming it the movie revolution of the century and pretty much demanding that anyone who calls himself a movie fan must accept "Avatar" as teh greatest thing evah? Is it because I'm still grumpy that people keep mistaking "Titanic" for the "biggest" movie of all time (hint: adjusted for inflation, the biggest movie of all time is still "Gone with the Wind")?

Read more »
Posted by The Derelict at 3:41 AM No comments:

This is an awesome bit of video madness: I Love the 30s!

There is more if you go HERE.

Posted by The Derelict at 2:57 AM No comments:

The Big Grand Theory of Everything (or how "Who Framed Roger Rabbit?" started me on the road to Retroville)

How did I become a RetroHead? This is my theory:

See, when I was a kid, there was a bit of a retro phase going on in Hollywood. From about 1988 to 1994, there were several movies released that were either aimed at young audiences or were at least appropriate for young audiences and they all dealt in one way or another with retro culture and a retro world. Many were set "back in the day" (1930s/40s/50s); many often had ties to retro culture or made reference to retro things or had a retro sensibility (kids TV shows in particular were filled with retro references). And most importantly, even though these movies and TV shows were set forty, fifty, sixty years in the past, they were meant to entertain children. In other words, when I was a kid, the world of the past (the world my grandparents grew up in) was a perfectly appropriate world in which to tell a story. There was nothing weird or highfalutin' or eccentric about telling stories to kids and setting those stories in the Depression era, or the WWII era, or the Eisenhower '50s.

Not that I've done a scientific study of the thing, but I don't believe this is really the case anymore. Most (if not all) of the current entertainment for kids is set in the present day, or the future, or if they're going to go back in time at all, (God help us) the 1970s. In other words, for kids today, the era of the "Greatest Generation" is simply not on their radar in terms of popular culture. Whereas, when I was a young gal of ten I was watching the 1990 "Dick Tracy" movie, the one set in a primary-colored 1930s world of gangsters and dames, or "Tiny Toon Adventures" with their references to "Citizen Kane" and "Invasion of the Body Snatchers." Those eras of the past were alive to me in a way I just don't think they are for kids who grew up in the late 90s and the 2000s.

Read more »
Posted by The Derelict at 5:34 AM No comments:

Labels: back to the future, dick tracy, grand theory of everything, growing up retro, hudsucker proxy, indiana jones, league of their own, radioland murders, retro heads, rocketeer, roger rabbit, the shadow

No, I'm not talking Don and Betty. I'm talking about me. Towards the end of season 3 (pretty much right after the JFK assassination episode), I was almost ready to give up on the show. I was losing interest, I didn't like the direction they were taking with some of the characters, and I was annoyed by how it all seemed to be turning into a Boomer retread of "The Significant 60s" (an era which had, prior to this show, been almost solely defined by the annoying hippie Boomers and their "youth culture," but which the Mad Men creators were going to reconsider in a fresh, new, adult-minded, understated, and non-hippie-like way). In the JFK episode I felt like the Mad Men creators were going to go back down that played-out road of THE SIXTIES, instead of sticking with the more intelligent and nuanced view of the decade they had been taking in the first two seasons.

I was almost ready to give the show up. Then. Then the finale happened and all was forgiven. The finale was so amazing, so satisfying and powerful and funny and touching and hardcore dramatic and kick ass that basically, I'm back on the Mad Men train. That's pretty much all I have to say about it. Mad Men's season 3 finale was brilliant. Best episode of TV ever. It should win an Emmy for, like, best TV episode ever made. Best Ever.

I've mended my ways with the show and now I can't wait for season 4 -- that was not something I was thinking in the penultimate episode of season 3, so well done, Mad Men peoples! You've brought me back into the fold.

Now, can Betty and her snoozer of a boyfriend/fiancee just go die in a fire already? I'm over you Betty and your divorcing ways. I'm also firmly on team Pete/Trudy. They are my new power couple on the show (though Joan/Silver Fox is also an option).

Posted by The Derelict at 5:50 PM No comments:

It's been awhile, eh? I guess I've been derelict in my duty to the blog, nyuck nyuck!!! Where have I been all these weeks? Well, writing a novel for one thing. It's gloriously bad -- all about a 1930s movie star actress who leads a secret life as an Indiana Jones-type treasure hunter and how she must find a magical ancient treasure before the Nazis do and save the world, blah blah adventurecakes -- it's all completely cliche and horribly written and it's truly terrible. But I love it. It was all part of National Novel Writing Month. So, I wrote my novel, and I spent a lot of time watching old movies as "research" (heh) and now I'm back and ready to go blogging.

My only problem is: I've got too many things I want to blog about. I've got so many ideas bumping around in the brain that I can't decide which to write about first. I want to write about Big Hollywood, the conservative website devoted to movies and culture that I have a love/hate relationship with (backstory: I am a conservative. And a movie lover. And I thought Big Hollywood would be sorta like Dirty Harry's Place only awesomer but instead it turned out to be kinda okay on one hand and a total snoozeville on the other). So, I thought I'd give my critiques on why Big Hollywood needs improvement and how it can go about improving itself (not that they even care what some lame-o blogger like me thinks, but I am their target audience, so maybe for business' sake they might consider my thoughts).

But then, I thought, I've been meaning to write about Turner Classic Movies and how on the one hand it's the most amazing channel to ever grace the small screen, but on the other hand they need to seriously reconsider some of the bumpers and intros they've been using lately (i.e.: the new opening for the primetime movies, where a bunch of creepy cgi-like people stare up into the sky at a giant movie screen while annoying tinkly music plays). TCM, for the love of Bogart, these new intros have got to go!

But then, I thought I'd be a little more positive and write about all the good movies I've watched lately (like "Lured" with Lucille Ball, and "The Big Clock," and "Primrose Path," and "My Name is Julia Ross") and all the amazing stars I've been grooving too lately (like Peter Lorre and Ginger Rogers and Priscilla Lane and Joel McCrea and Marie Dressler and John Garfield.... *swoon!*).

Then there's the fact that I want to continue my "How to Watch Old Movies" series but I'm not sure which direction to take it in next (should I do a piece on credit sequences in old movies, or old movie film scores, or the importance of character actors in the old movie world? -- or is the whole thing all too ambitious and too much work and I'm just a lazy bum derelict after all....)

Actually, I've also been thinking about how I came to be such a retro fanatic in the first place and I might even write something that explains my grand theory for everything retro and how to make your family and friends into retro heads (first tip: start 'em young).

So anyway, this is where I'm at: Too many ideas and I don't know where to start. Since this post has been basically information free and was just me venting, here's something of substance: 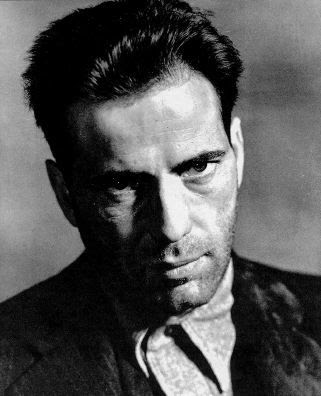 Duke Mantee
Posted by The Derelict at 4:19 PM No comments: