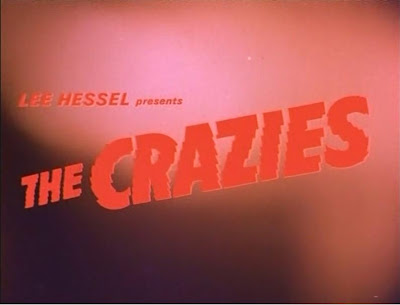 I don't normally like remakes, but in the case of George Romero's 1973 cult movie, THE CRAZIES, I'm all for it.

Why? Because the '73 version of THE CRAZIES is not a good movie. I wouldn't call it a bad movie, exactly, but it's one of those movies with a great premise done in by a bad script and bad acting (and, it must be said, the most annoying soundtrack ever -- 90 minutes of military snare drum over EVERY SCENE is enough to make the ears bleed). It has its moments, but ultimately it's a failure. It's the perfect, "If only..." or "What might have been..." movie, so that makes it the perfect candidate for a remake.

Read more »
Posted by The Derelict at 2:19 PM No comments: 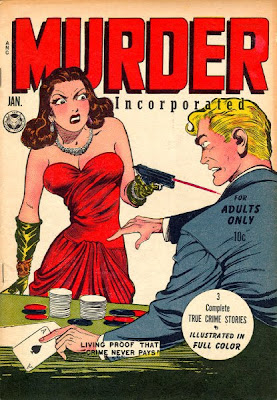 More crime comics! This one is from "Murder Incorporated," a Fox Feature Syndicate publication from the late 1940s.

I especially enjoy the "For Adults Only" warning on the right-hand side. I'm sure that was effective.

The awesome CRIMEBOSS website is my resource for all these comic book covers, by the way.

Posted by The Derelict at 4:33 PM No comments:

Posted by The Derelict at 1:29 PM No comments:

Labels: kathryn grayson, not an obit, rest in peace

Ethel Merman! From the early 30s.

Posted by The Derelict at 11:06 PM No comments:

Posted by The Derelict at 2:18 AM No comments:

As for the "before I was born" argument, I feel just the opposite. I find very little in run-of-the-mill contemporary commercial movies that interests me, mainly because they're not trying anything new -- they're just making pale copies of sturdier pictures from the past, even if it's not my past. I'm fascinated by popular culture from the first half of the 20th Century, before I was born -- whether it's Jerome Kern or Betty Boop -- and what adults (in their 20s, 30s and 40s!) were into when I was a kid (like fondue and "mood music"). All other things being equal, I'd rather see any old movie from 1950 than any old movie from 2010 if only because I've never actually been to 1950. I can't ever know 1950 first-hand, but at least I can see what other people saw back in 1950 -- and if the 2010 movie manages to sustain my interest for more than a week or two, I know I can catch it later.

Posted by The Derelict at 11:23 AM No comments: 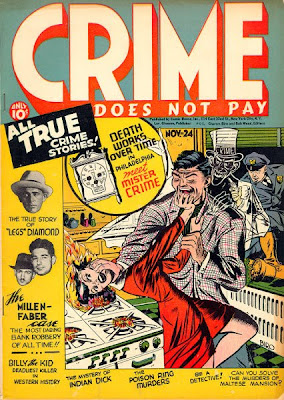 A cover from Issue #24 of "Crime Does Not Pay," a 1940s crime comic published by Lev Gleason Publications. Yes, that is a woman getting her head shoved into the flames of a gas stove by a psychotic criminal. Yes, this cover graced the newsstands of 1940s America.

From the mid-1940s up into the mid-1950s, romance, crime, horror, and war comics were often more popular with readers than superhero comics. Certain politicians, opinion makers, religious leaders, law enforcement types, and busybodies made claims that "Crime Does Not Pay" and other true crime comics contributed to juvenile delinquency and lobbied to get these types of comics banned. Eventually all this hysteria over comics led to the institution of the "Comics Code" in 1954 and it was safe, sterile superheroes from then on out on the newsstands of America.

"Crime Does Not Pay" was known for its provocative and violent covers and Issue #24 does not disappoint!
Posted by The Derelict at 7:27 PM No comments:

One of my favorite clips from "Who Framed Roger Rabbit?"

Posted by The Derelict at 1:17 PM No comments:

The Siren has a great post going on her blog about uncool cinema opinions (she defines "uncool" as "courting hoots of derision from critical colleagues") and while I offered a few of my own in the comments section, here on my own blog I'm going to offer up my big one:

I absolutely love the movie version of GYPSY (Mervyn LeRoy, 1962).

And everyone can bask in the glorious uncoolness (i.e.: awesomeness) of this movie on Wednesday, February 10th when GYPSY plays on TCM at 5:30 PM EST.

How to Watch Old Movies: The Opening Credits 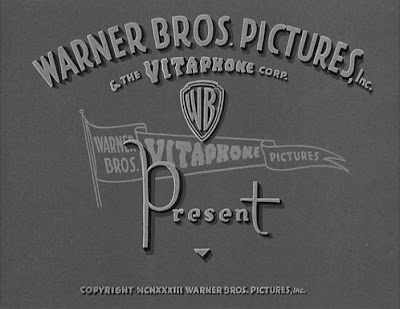 Yeah, okay, so opening credits in old movies can be kinda boring, just a few title cards, a minute and a half of text and no cinema exactly, just flat, static cards with a bunch of names, like the movie equivalent of the theater playbill, accompanied by the bombastic orchestral score of the movie's theme. Not like today's movies that start right in with the action -- with the movie -- not even worrying about telling us who is in the thing, just get us right to the story, BAM!

Well, I get it. The way movies start nowadays, it's more cinematic. More organic. Not as stilted and artificial as the old title cards in the old movies.

But there's something oddly comforting about the way old movies do their opening credits. It's like the movie is inviting us in, welcoming us, easing us into the experience of the movie. Preparing our brains for the wonders to come, but only hinting at those wonders, only giving a few fleeting glimpses of what we can hope to expect.

I would totally watch a Glenn Miller Band halftime show

This is a perfect example of why I love Kathy Shaidle.

This is for all the people who complained about The Who playing the Super Bowl half time show. You are forgiven: 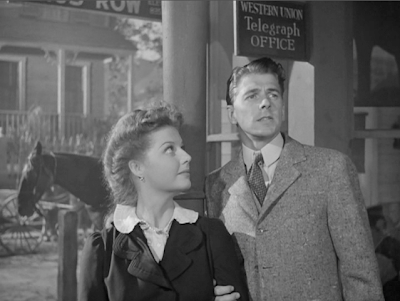 Happy birthday to one of the stars of KINGS ROW! He also did some other stuff later in life as well.

KINGS ROW (Sam Wood, 1942) is one of my favorites in the crazy, over-the-top, weird-ass 1940s drama category. Implied incest, crazy nymphos, diabolical doctors, amputations, insanity, and then amidst it all a rather touching love story (between the Oomph Girl and the future leader of the free world). Also, hands down, one of the best musical scores of any picture from that era.

Posted by The Derelict at 4:57 PM No comments:

First of all, the board is blah. Just because it's a circle doesn't mean it's suddenly "modern." It might surprise Hasbro, but they did have circles back in the 1930s, believe it or not. I guarantee you, most board game players don't look at a square board and think, "How old fashioned! How positively squaresville! I don't want to play on a square board!" And most board game players don't look at a circular board and think, "Ooooooo! How futuristic and cool! Why, I never imagined a board game could have a circular board! Gosh, now I want to play!" Most of the people who play board games couldn't care less about the shape of the board unless it has some bearing on the actual game play (i.e.: the board needs to be shaped a certain way for the game to work). Changing the Monopoly board from square to circle does nothing to impact game play; it's just a cosmetic change meant to make the game "cooler."

Read more »
Posted by The Derelict at 6:47 PM No comments:

Posted by The Derelict at 2:59 PM No comments: 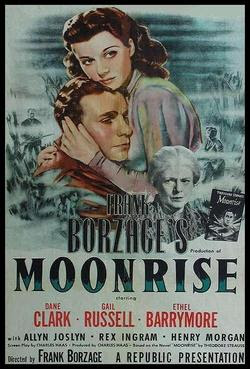 This week's obsession is a movie I haven't seen. Yet.

It's one of those movies that cinephiles and in-the-know types are hep to but it's not available on DVD and it wasn't a big hit at the time of its initial release in 1948. In other words, we're talking cult status, forgotten masterpiece stuff. I've never seen it and I'm dying to catch a glimpse.

MOONRISE falls into a sub-genre of noir that I think is best described as "Romance Noir" (NORA PRENTISS is another example of the type, which I briefly reviewed here).

Lyrical romance with a side dish of psychological melodrama is the order of the day in the rundown diner of Romance Noir. Sure, there's murder and violence in these types of films, but the real pulse of Romance Noir is found, of course, in the love story. That's one of the reason's I'm excited to watch MOONRISE -- I want to get lost in the love story, a love story with a dark noir-ish sensibility, all shadows, forbidden love, a little masochism, the kind that hurts so good, etc. etc., all that angsty wounded-hearts film noir suffering....

"But remember," the Romance Noir seems to be saying, "love never fails, love might even save, there might be a light at the end of that long, dark, black-hearted tunnel, there might be redemption in the arms of someone you love...." I have a feeling this is where MOONRISE is coming from and if I'm right, it's gonna be good. Count me in.