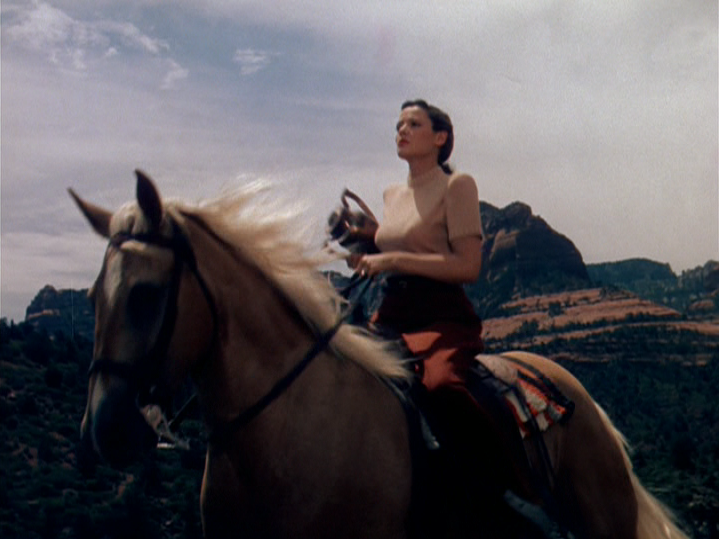 Check it out at Libertas! (Be warned though: Lotsa spoilers, so if you haven't seen the movie yet, get thee to Netflix!)

Also, I my thoughts on last week's MAD MEN are up at LFM.
Posted by The Derelict at 7:35 PM No comments: 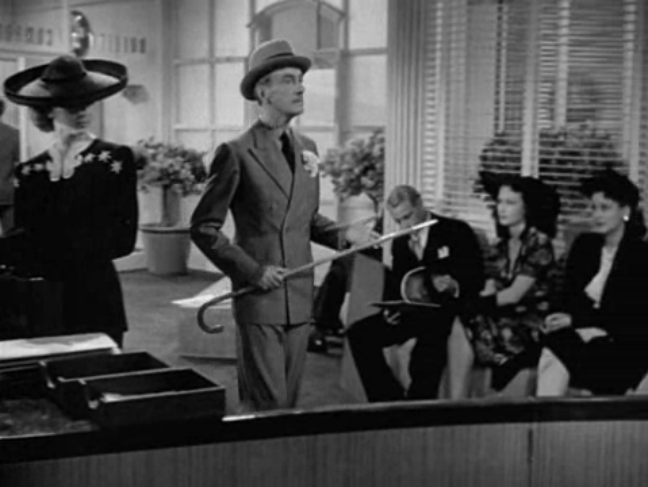 from Otto Preminger's LAURA
Posted by The Derelict at 1:11 AM 2 comments: 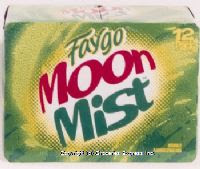 Vaguely Mountain Dew-like, Moon Mist is what you buy at the convenience store when you only have a buck and it's Thursday night in summer and you're out with your friends (and they're over in the other aisle buying sunflower seeds and Slim Jims) and you want something to drink that has caffeine and might mix well with vodka, so you grab a 20 oz of Moon Mist and then everybody pays and you drive out to the bonfire going on at Andy's house.

Otherwise, you drink it in your basement while you play video games and watch 80s movies on TV all day because the thought of going outside in the 90 degree heat is too much for your summer lazy psyche to handle.


But it also comes, inexplicably in Red and Blue. 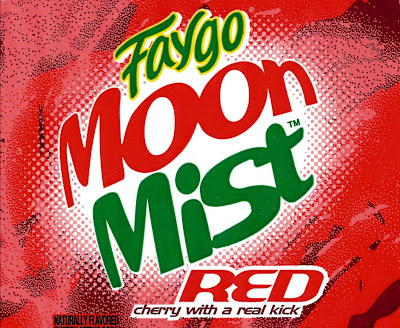 There's also the mysteriously vanished Morning Mist, which I assume was part of the Mist extended family along with Mists Red and Blue, but I can't seem to find any info on the web about Morning Mist other than the name. Who knows what happened to it or why... It's a MIST-ERY!

But there's always original flavor Moon Mist (in diet too) for all your summer basement video game playing needs. 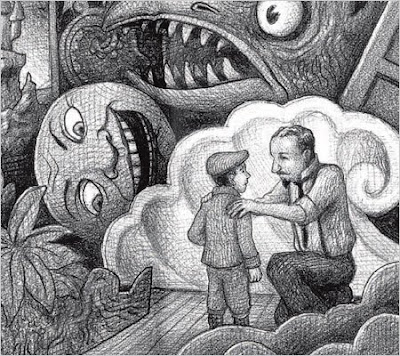 I'm half-way through this gorgeous book and it's simply wonderful. Part novel, part black and white picture book, it's like a silent film in literary form. And of course, the storyline involves a certain French filmmaker and master of the fantastic...

Marty is making a children's film! And if the source novel and Scorsese's well-known love for movie history is anything to go by, it has the potential to be a masterpiece. Scorsese fans and silent movie geeks rejoice!
Posted by The Derelict at 1:46 PM No comments:

I changed my mind

I posted something earlier today, but I decided to take it down. Not for any scandalous reason, just I'm a perfectionist and wasn't satisfied.

In other words, it was crap.

So, instead of my lame writing, I give you: 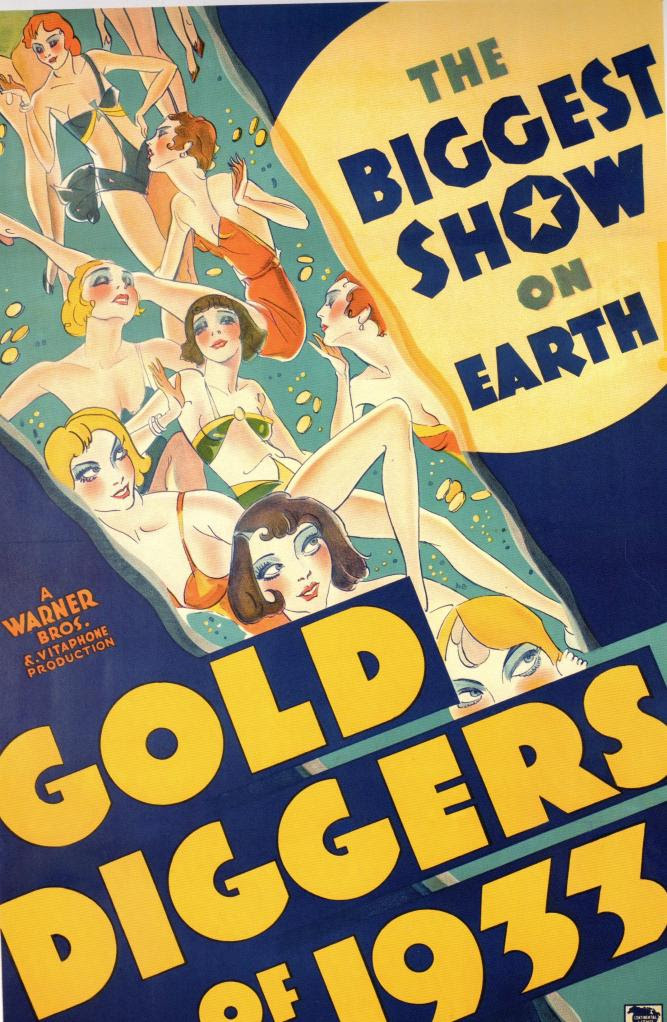 GOLD DIGGERS!
Posted by The Derelict at 6:43 PM 2 comments:

My thoughts on episode four can be found HERE.

I am liking Dr. Miller a lot more this episode, by the way.

Posted by The Derelict at 1:16 AM No comments:

Labels: billie holiday, glorious sounds of retro, that's all i ask of you 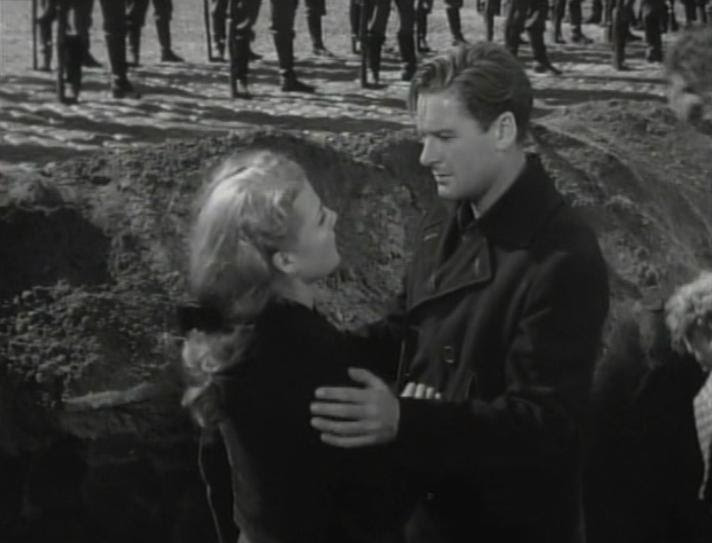 It's not a great movie, but EDGE OF DARKNESS (Lewis Milestone, 1943) really stirred up my emotions the other day, so I decided to write about it in my latest "Classic Cinema Obsession" column for LFM.

It's your typical Warner Brothers WWII propaganda-type film, but its message about freedom and the sacrifices necessary for liberty had me fist-pumping the climactic battle scenes. It just felt like the message was as relevant today as it was back in the 1940s.

This is also a movie about the importance of firearms -- and what NRA-supporting conservative doesn't like that? Everybody is packing heat in this one, from sweet little old ladies to the town minister.

Plus, with Errol Flynn and Ann Sheridan -- two of my all-time favorites -- starring in it, I was almost guaranteed to like this flick.

Guns, Flynn, Sheridan, lotsa speechifying about the importance of fighting for your freedom -- how could a heavy duty right winger like me resist?

Having brilliant actors like Walter Huston, Judith Anderson, and Ruth Gordon in the supporting cast didn't hurt either.

I ring the bell for EDGE OF DARKNESS here. 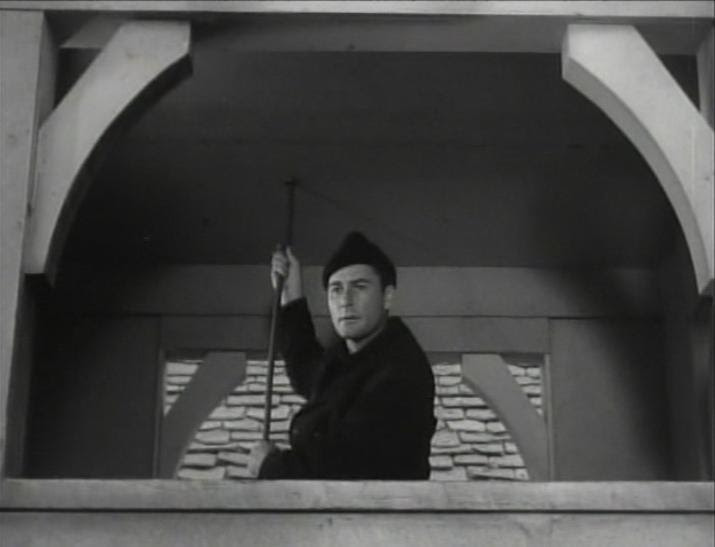 Posted by The Derelict at 2:39 AM No comments: 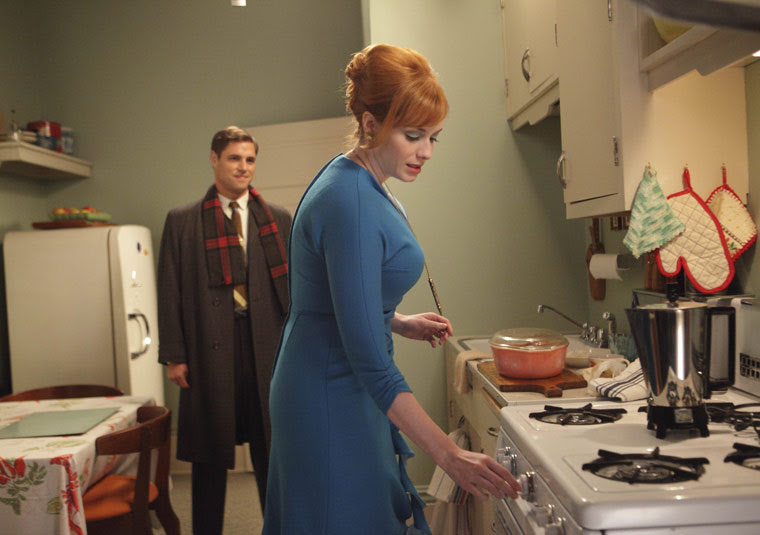 My weekly musings can be found at Libertas Film Magazine, as usual.

I'm already liking this season a lot more than season 3, though it's early yet.

This article from Reuters tries to make it seem like MAD MEN is slipping in the ratings, saying that this week's episode is down 24% in ratings from the season four premiere -- but both the 2.2 million viewers for this past Sunday's ep and the 2.9 million viewers for the season four premiere are BOTH higher than last season's average of 1.8 million. Yeah, the ratings have slipped 24% since the premiere, but the season as a whole is actually doing better than last season, ratings-wise.

So, that "ratings plunge" headline is a leeeetle misleading. Headline should have read: MAD MEN RATINGS DROP FROM SEASON PREMIERE, STILL HIGHER THAN LAST SEASON'S AVERAGE. That doesn't sound nearly as exciting, though. Boring old facts getting in the way of a good headline! The nerve!

Anyway, the show has been really great so far in season 4, even just three episodes in. Can't wait for next week, which looks like a Pete-centric ep. PETE!
Posted by The Derelict at 6:14 PM No comments: 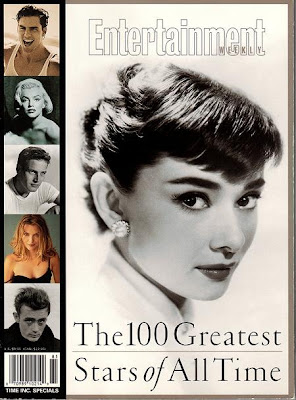 My latest article for LFM is about TCM's annual Summer Under the Stars festival. It's also a defense of movie stars in general, in which I argue that the movies still need movie stars and we shouldn't be so quick to dismiss them.

I also wax a little nostalgic about Entertainment Weekly's "100 Greatest Stars of All Time" -- a magazine special edition I bought when I was sixteen and which I credit with turning me into the old movie fanatic I am today. I fell in love with old movies because I fell in love with the movie stars in them. I still have my dog-eared copy of "100 Greatest Stars of All Time" and I still pick it up from time to time to revisit those old loves.

I first discovered Barbara Stanwyck and Steve McQueen in those pages, if you can believe it. If it weren't for that fateful day in a Walgreens drug store all those years ago -- when I grabbed "100 Greatest Stars of All Time" off the newsstand on a whim -- I might not have known the pleasures of LOVE WITH THE PROPER STRANGER or BALL OF FIRE.

But most of all, my article is just an excuse to post some of those amazing posters from last year's Summer Under the Stars. I wish TCM would turn all of these into full-sized glossy posters so I can put them on my wall. Seriously: 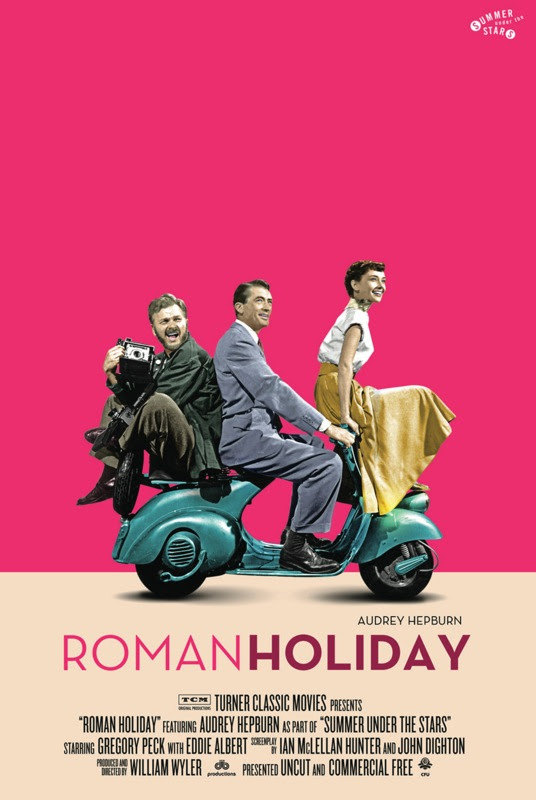 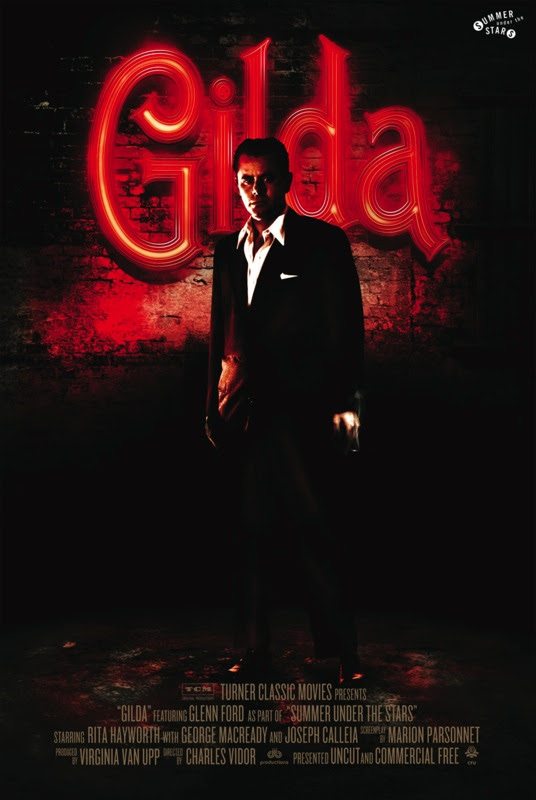 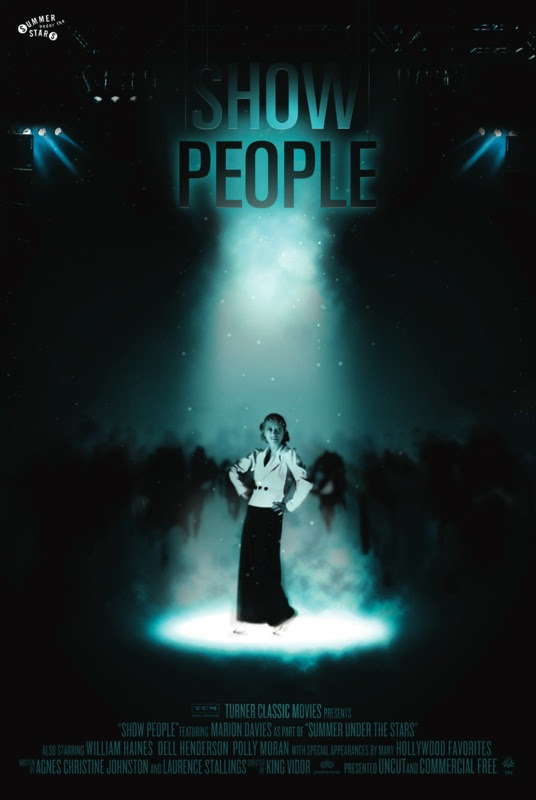 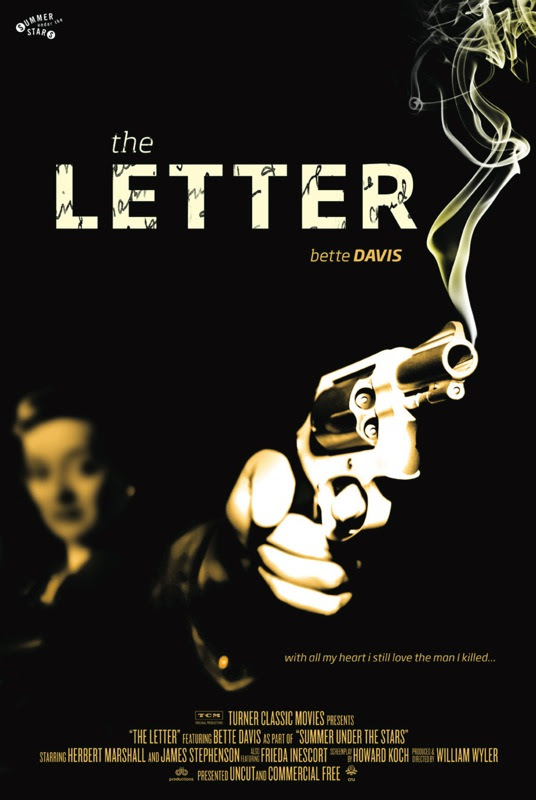 Posted by The Derelict at 9:17 AM No comments:

I was a little late in writing it, but my recap of this week's episode of MAD MEN has been posted at LFM.

Check it out -- before you get sucked into the multi-dimensional warp on Roger's office wall!
Posted by The Derelict at 2:04 PM No comments: