The Derelict Goes to Dark Street: "Pickup On South Street" (1953)

Weekly Wednesday Noir. Trying to make this a regular feature. And what better way to inaugurate the affair than with a Sam Fuller flick. His best, perhaps? 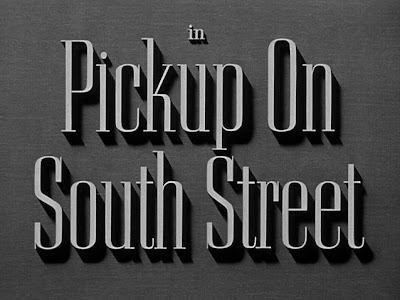 I've only seen one other Fuller movie (Verboten! is it's name, for those keeping score). "Pickup" is much better. Way better. No wonder it got the Criterion treatment. (Not that "Verboten!" is horrible or anything, in fact I really dug it, but mostly for the slight tinge of exploitation that hangs on it and the fact that insurgent Nazis get their asses whooped. I love seeing terrorists and/or Nazis get their asses whooped. When the Nazis ARE terrorists it's like a birthday party with two cakes.)
"Pickup" is the story of a "cannon" (that's movie slang for a pickpocket -- or is it real slang? I can never tell...) who steals Jean Peters' wallet. The pickpocket is Richard Widmark, still working in his Tommy Udo phase. Jeanie is a former prostitute who is unwittingly passing top secrets to the Commies (thanks to her no-good boyfriend, Richard Kiley).
Widmark is his usual snarky, wise-ass criminal type. Basically, I love him. He's such a freakin' rebel of a two-bit crook that he's willing to extort money from the Communists just to spite those asshole cops. Ha! The cops, for their part, are all a bunch of cement blocks of superior righteousness, as they usually are in a noir with a criminal protag. The reds are just as weasely and shifty-eyed as they should be (frakkin' Commies).
First, what I loved is the gritty New York. I love New York City, as many know, but I really love her when she's early '50s and gritty. I think all Detroit kids love The Gritty. It's how we grew up and we like to see it reflected in other cities too. 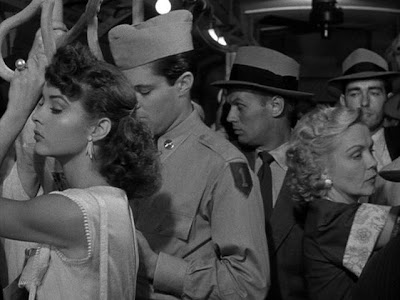 This subway car must smell like a heavy dose of summertime B.O. The sticky, ripe kind. You know it's true. Old movies in black and white rarely make you think about how things must've smelled (the celluloid back then being so ethereal and silvery and all), but this movie manages it. It smells from the hot subway cars to the fishy waterfront shack houses. 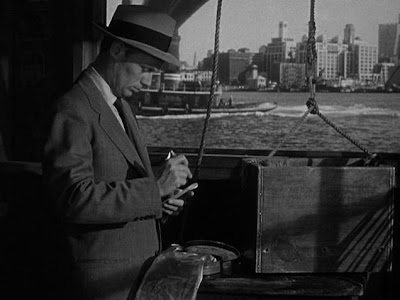 I loved this flick most of all, though, for the two leading ladies, Jean Peters and Thelma Ritter.

First: Jean Peters. It was my first time out with her and she delivered the goods. She's not setting any acting records or nothing, but she's about as brassy and used up as any noir dame I've ever seen. When Sam Fuller beats a girl up, he beats a girl up: 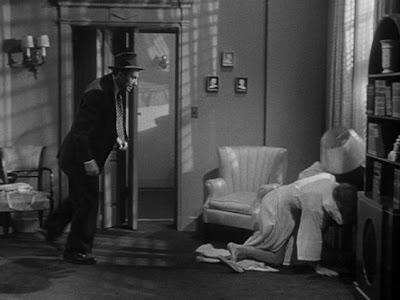 A face full of lamp and end table. I'm not entirely sure this hit wasn't real. And when he wants to humiliate her, he lets her get a face full of beer: 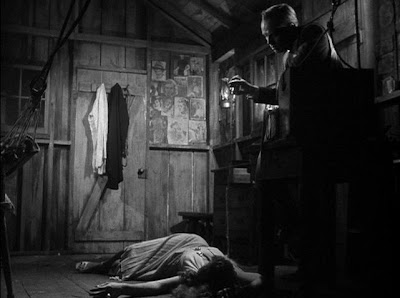 What meaner way is there to wake a girl up, and right after she got punched in the face too?

A gal like Jean Peters is the reason you watch Noir. 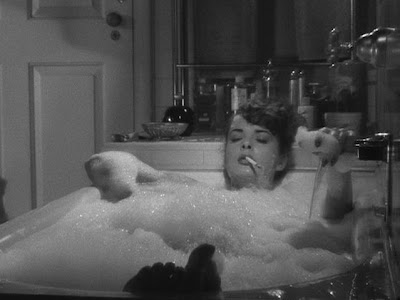 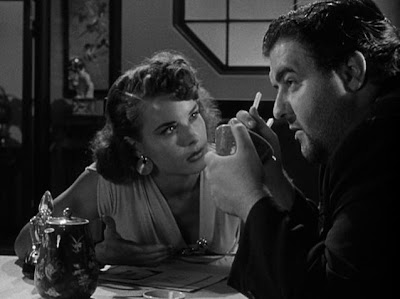 Look at her earrings! So, so traishy, and awesome. And look at that fat slob of a pig! Oh crazy characters of Noir, how you send me!

The premiere scenes in this movie, though, belong to The Great Thelma Ritter. She's a professional stool pigeon, selling her information to the cops, to anybody, for 50 bucks a pop. She's old and tired and she just wants enough money to buy herself a nice plot of land in a nice, fancy cemetery. For a hard-luck broad like herself, one who has seen and lived a thousand tough breaks, all she asks is that she not get buried in Potter's Field like the rest of the poor nobodies. She broke my heart. 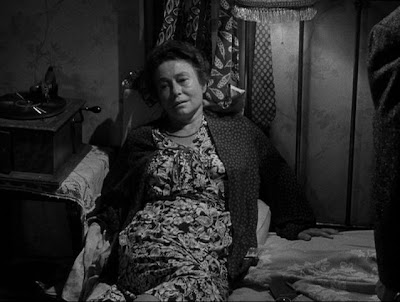 Just an old clock runnin' down.

In every movie I've ever seen her in, Thelma Ritter always gets the best lines. Or maybe, she just makes them the best. God, I love a good film noir. That's it; I'm spent.

Okay Dick, send us out with a hot, smoldering look of defiance. 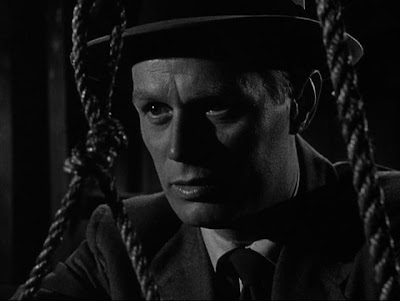 Niiiiice. That's Noir, baby.
Posted by The Derelict at 2:56 AM